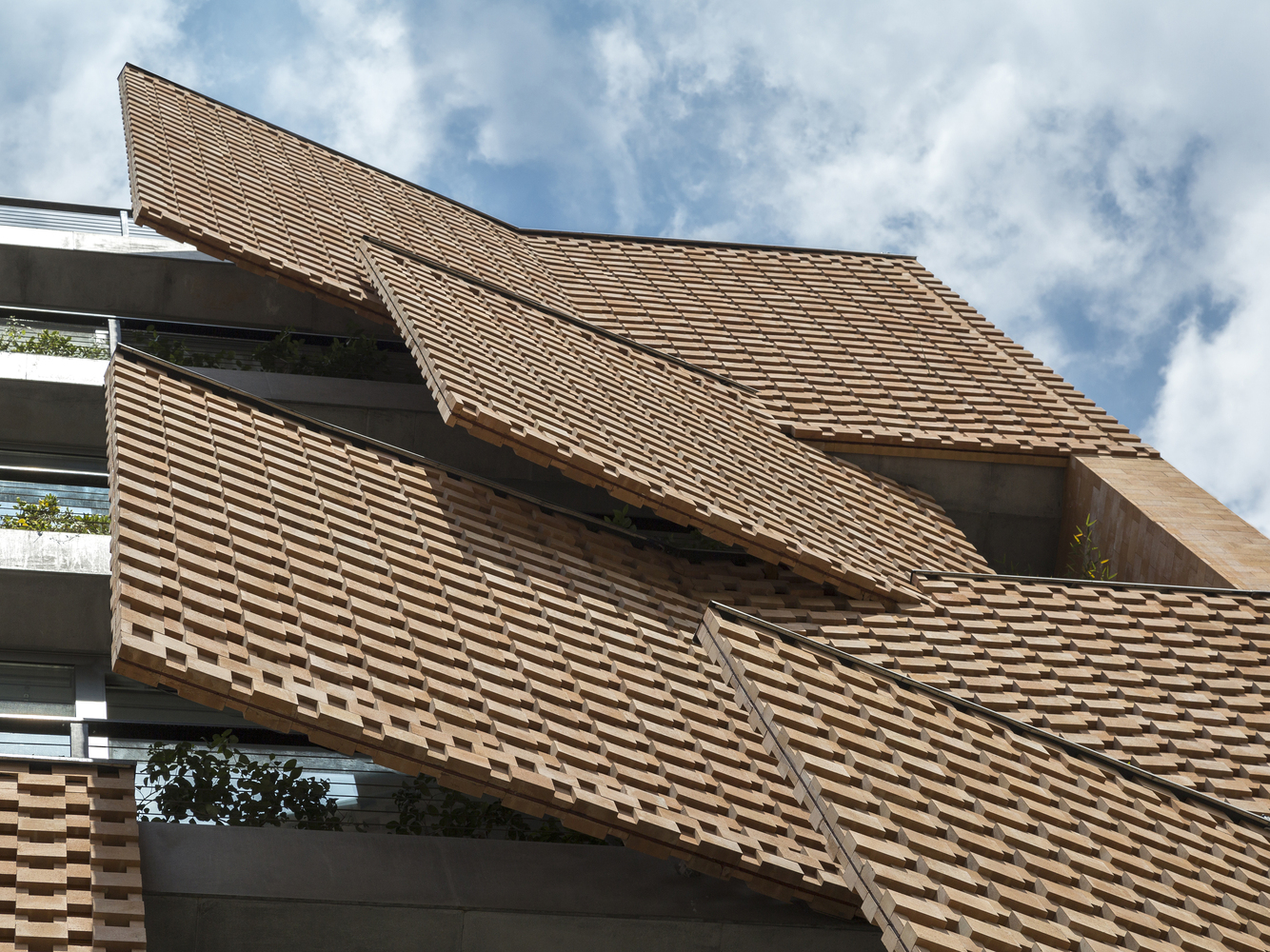 A built structure of a 7-store apartment with 2 floors under the ground was given to ‘Fundamental Approach Architects” to design. The architects beautifully transformed the facade of this housing block located in Tehran using angular screens of perforated bricks.

Read: What Is A Façade And Its Top 6 Functions?

Fundamental Approach Architects are an Iranian practice, led by architect Moshen Kazemianfard. According to them, the client requested interior spaces with open views without compromising the privacy factor. This criterion played a huge role in reconfiguring the interior of the ‘Saadat Abad Residential Building’ and designing the façade which could serve a strong connection between the interior and exterior spaces as well as relate to its urban setting.

This Tehran apartment hides 2-storeys below ground level and combines apartments with commercial units at its base and underground parking. Additionally, a new double skin of brick and glass panels were added to balance views, light, and a connection to the outdoors with the secrecy required in the apartments.

In these types of projects, the classification of borders not only shapes the exterior look of the building but also outlines the relationship between the interior and exterior spaces. In the recent construction era, numerous megacities are expanding in the wrong direction and limiting the building’s urban boundaries; ultimately eradicating the amalgamation of interior and exterior spaces. In this project, the urban solid border is blurred, the solid façade is replaced by a soft fluid space between the bricks and glass skins – this is one of the crucial features in this project.

During the winters, the porous brick façade brings in light into the interior space, creating this beautiful effect of light and shadow. The permeable façade not only brightens up space but also creates this warm feeling inside the structure which is very comforting. Also, during the hot summer months, the façade helps in saving energy; you may think how, well, the thickness of the brick wall prevents the sunlight from entering and only permits adequate light to vivify up the interior space.

With the main circulation core at the rear of the block, living spaces have been pushed to the front to maximize views out to the building’s surroundings. To add an animation effect, create a gap for natural ventilation, and angle views from the living spaces towards a nearby crossing, the brick panels on the facade have been twisted outwards.

Tiny strips of plantation are placed in the gap between the brick skin and the glazing. Internally, textured brick walls locus the external panels, and stone flooring acts as a continuation of the pavement outside to help combine the urban with the interior. An extensive set of steps runs access up to the commercial unit as well as a separate entrance corridor to the apartments, which sit a little above ground level. An adjacent set of stairs connects to the basement level.

Brick walls and façade for long have been and continue to be ones of the most popular methods of building, particularly in areas where a large amount of natural ventilation is crucial. When it comes to façade, bricks indeed are a great choice to create that amazing rustic aesthetics and well-ventilated spaces.

For this Tehran building brick façade project – beautiful aesthetics truly makes its mark. It’s merely not about its physically appealing features, but also the array of functional attributes which efficiently serve the residents of this innovative space.

Acknowledgment and appreciations go to www.faaoffice.com and Archdaily for the information and images contained in this article.

Authored by a building expert from Wienerberger India