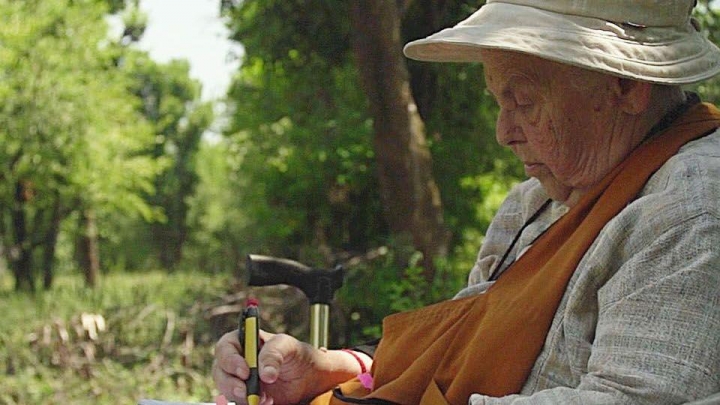 Formal education or degree isn’t prerequisite to get into the profession of architecture. Well, this might sound strange to most of the present-day architects, but it is one reality. Did you know there are many architects across the globe who did not take any formal education in architecture, in fact, are self-taught? The most prominent examples are Le Corbusier, Mies Van Der Rohe, Louis Sullivan, and Frank Lloyd Wright. Well, these are just a few stalwarts who successfully dominated this profession, but there are several other names who are not that popular or even not known. One such name is Didi Contractor.

Unlike modern and formally trained architects, Didi Contractor is specialized in mud, stone, and bamboo architecture. And now in her late 80’s, she is actively involved in ‘sustainable architecture’.

As already said, for nearly three decades Didi Contractor has been passionately implementing her architectural visions in North-Western parts of India, the Kangra Valley, closely at the foothills of the Himalayas. Her works showcase on theme i.e. “Marrying Earth to The Building”; Contractor has been beautifully combining rural traditions with modern demands. Her creations include houses built from clay, bamboo, slate and river stone, and most importantly are constructed in tribute to their natural surroundings.

With all due respect, let’s now highlight some interesting things about her:

Contractor real name is Delia Kinzinger. She was born to a German father and American mother in 1929 in the US. While she grew up in Texas, USA, she spent some time in Europe too. The Second World War brought her back to the US where she completed her graduation degree.

http://ayurvedic-treatment.com/tag/taj-garden-retreat/ 2. Inclination For The Profession Of Architecture

At the little age of 11, Contractor began to listen to Frank Lloyd Wright and saw one of his works exhibitions along with her parents. This indeed made a huge impression on her mind and she discovered her proclivity towards the profession of architecture. Yes, Contractor is not an architect by training, all her knowledge has come from wide reading and exploring different types of architecture throughout her life.

Contractor was inclined towards designing and building houses which, as a kid, she did with her parents. But, despite of the eternal love for architecture her parents never encouraged her to pursue a degree in architecture. Hence, she had to pursue graduation in arts at the University of Colorado.

In 1951, during her university days, Contractor fell in love with an Indian-Gujarati student of civil engineering, Ramji Narayan. They tied knots and returned to India and raise a family with three children. The couple during the early days of marriage stayed in Nashik in a joint family setting for a decade, thereafter in the 1960s they shifted to Mumbai.

5. What Bought Her To Dharamsala?

Coming to her happily married life, circumstances changed, and she had to part ways with her husband. In the beginning, a traditional family mindset didn’t permit her to work in the country and now she was too much in love with India, hence she never looked to go back. This took her to Sidhbari near Dharamsala along with her three kids. Since then, she made Dharamsala her home.

6. Binding With Her First Love

Sidhbari is placed in the foothills of the beautiful Dhauladhar mountains in Kangra district, Himachal Pradesh. After settling amid mother nature Contractor concentrated on pursuing her first love, i.e. Architecture.

Her artistic background allowed her to swiftly switch to the field of interior designing and architecture. A deep perusal of Didi’s architecture uncovers that her buildings seem to grow from the earth and are in perfect harmony with nature. For her, there was only a change of medium to clay, bamboo, slate and river stone. The moment she learned the properties and the art of handling these building materials, there was no looking back.

Today villages across the Dhauladhar ranges have mud houses with slate roofs which naturally have the advantage of remaining cool in summers and warm in winters. All the credit goes to Didi Contractor of course! She has been designing eco-friendly buildings for over 3 decades, many renowned institutions and residences have been built using the same locally available materials, i.e. Stones from rivers, mud, bamboo, and slate.

Contractor has developed a technique to construct sustainable homes with mud and stone which are inspired mostly from the local tradition. In about three decades, she has designed and built 15+ houses in and around Dharamshala and some institutions which are a perfect example of sustainable structures:

She also got in touch with the local artisans and other artists who were assisting her in restoring the Indian art forms.

With a mission to create eco-friendly architecture, Contractor invented a unique approach of following the ‘rhythm of universe’ or the ‘cycles of nature’. She always tries to sync the process of building construction with the nature cycle so that the end products are in perfect harmony with the environment.

In the 70s, Didi designed a solar cooker with mud bricks. This cooker was designed essentially to reduce energy consumption and pollution. In Sidhbari, this cooker can be used for at least for four months in a year when there is a good amount of sunlight.

In 2017, she received the Women Artists, Architects, and Designers (WADe) Asia Life Time Achievement award. Extolling her commendable work, VIPs from the architecture fraternity from India, Sri Lanka, Thailand, Bhutan, Bangladesh, and Nepal, who were attending the event in Gurgaon, gave her a standing ovation when she received the award.

Apart from building ecological homes, Didi has been training young artisans teaching ecological values and reviving local skills for the past three decades.

In an interview with HarmonyIndia, Didi said,

I am not against money but valuing things by money is a terrible mistake. The most valuable things are those we cannot buy, like love and sunsets. We have betrayed our relationship with nature. We should be ashamed that we are not leaving behind a better world.

We can surely not reverse the way development has happened, but we surely pause a bit and think about our steps a bit more before we cement one more brick in the direction of what we call GROWTH.

Curated by a Building Expert from Wienerberger India