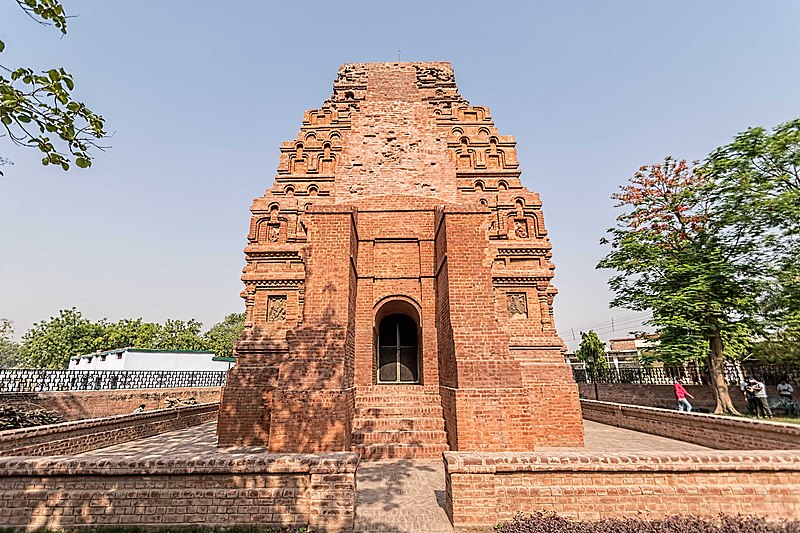 The art of baked soil has a sheer prominence in a country like India. Believe it or not, Indian architectural face prominently hints at the beautiful terracotta and brick designs. Ever since mid-15th Century, it holds as much importance as other architectural design of the country. Be it influence or achievement, this type of architectural design is sure to get you inquisitive about its origins. Take Bhitargaon Temple for example! Even in this revolutionary constructional world of remarkable growth, the ancient design of the temple is sure to attract all your attention.  Indeed, Indian architecture has something to do with the beauty and art of baked soil. Its structure speaks the glory of terracotta, in a nutshell.

Bhitargaon Temple – A Peek Into Its History

To say that Bhitargaon temple is the largest Indian brick temple till date would be an understatement. This oldest terracotta temple has survived from the time of late Gupta period. The production of brick masonry became possible in this temple during the 5th century. It’s an early example of one such temple that is entirely designed in brick.

There are numerous stories surrounding this largest Indian Brick temple. Once when great Alexander Cunningham visited here around 1877 & 1878, the temple was highly praised. In the year 1894, it got reconstructed from masonry pile. While its structure still retains the same, some of the tiles had already been stolen; a few of them reside in a couple of museums abroad. With the reconstruction, the architecture of the temple has changed giving a substantially different look. Sadly, it misses majestic entrance porch, better known as ardha-manDapa. It was earlier captured in 1878.

According to historical evidence, the temple has been one of the several temples during Gupta period. In fact, Alexander Cunningham had already got appointed as ‘Archaeological Surveyor’ by Curzon in the year 1861. Over another decade, Cunningham alongside assistants had surveyed a couple of temples. That’s how he visited here in this temple in the year 1877. Right then, he opined that the structure of the temple was far older than what had been anticipated so far. It had been older than the 7th century A.D.

As per what he had speculated, the date was taken to be around 5th to 6th century. However, in the year 1974, Ashmolean’s James Harle at Oxford had suggested an anticipated date of 425 & 450. Nevertheless, the most authoritative survey had been brought from M. Zaheer analysis. The research by Zaheer had suggested that it had been built in 5th century. And the structure is predominantly based on the stylistic as well as iconographic evidence.

The existing temples during Gupta dynasty were mainly made of stones with flat roofs. Bhitargaon had been the first and foremost example of a temple having structure based on tall trapezoidal, i.e. shikhara. It also housed a garbha-griha, better known as inner sanctum. This particular feature became a standard one in nagara style! Besides shikhara style, another unique thing about the temple was the inclusion of medieval texts like Manasara.

With inner sanctum of about 15×15 feet, it is proved to be the tallest. It had been designed in terracotta sculptures. Representing first stages of experimentation in the county’s constructional scenarios, its material of terracotta and brick has been predominant to capture everyone’s attention. Within a hundred years, other such brick temple construction also came up. But nothing could ever demean the importance of this particular style of temple.

Interesting isn’t it? This architectural splendor if the terracotta sculptors stands amidst the hustle bustle of Bithargaon in Uttar Pradesh. Even today it is extremely well maintained – no wonder stands tall with pride. Unquestionably, this temple is a window to a period that existed more than 1500 years ago and the birth of temples in India and their exquisite architecture.