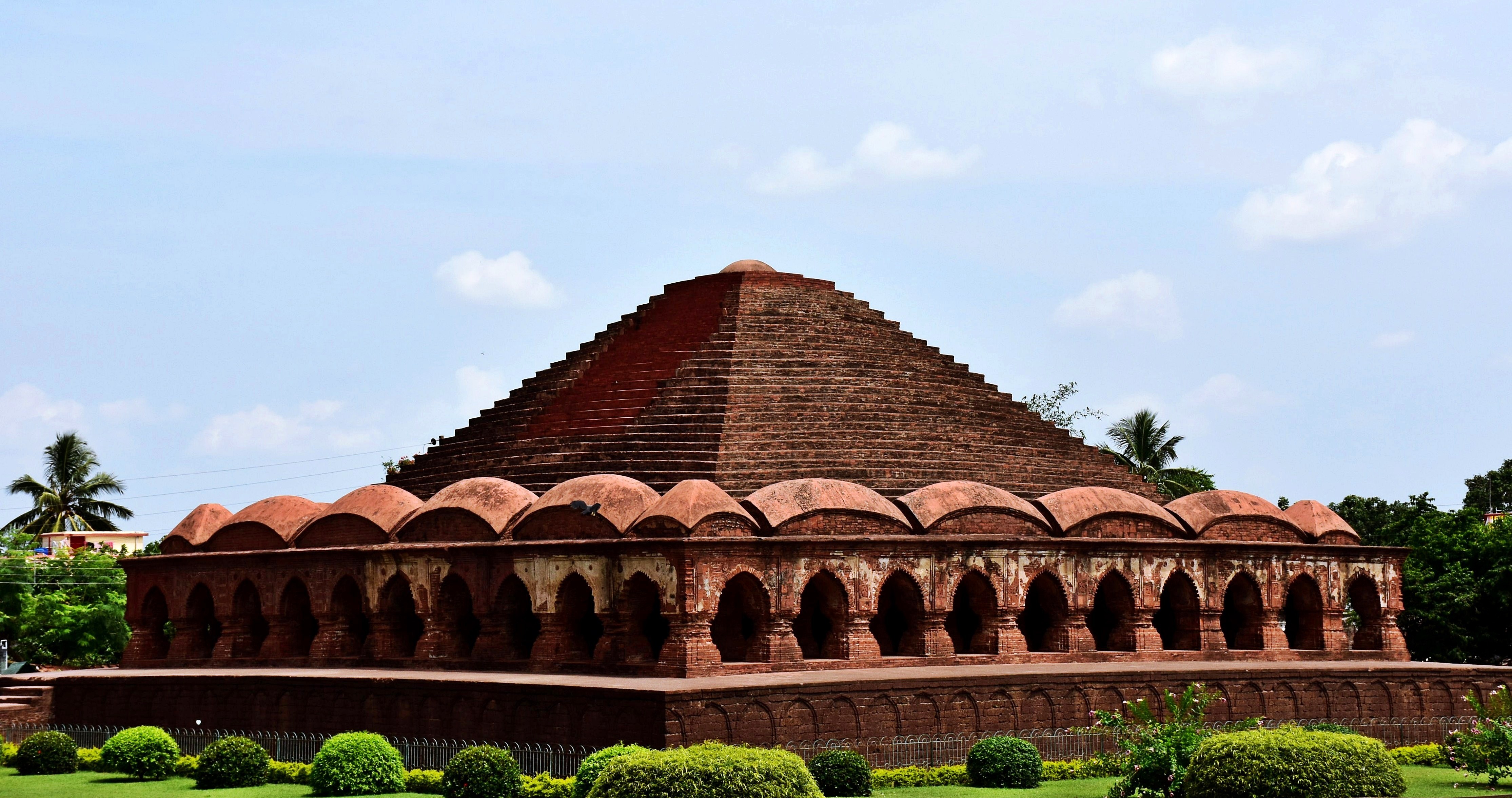 We feel immensely proud when it comes to the rich, cultural heritage of our country, India, don’t we? The breathtaking historical monuments like Meenakshi Temple, Qutub Minar, Taj Mahal are just a few of the ones we can’t stop flaunting and bragging about. And that’s not all, India hides within a lot that is still unknown and unexplored. This time we thought of knowing one lesser-known diamond of India – The Oldest Brick Temple, Rasmancha in Bishnupur.

Little About Rasmancha in Bishnupur

King Hambhir established Rasmancha in Bishnupur in 1600 AD. The temple was used to exhibit all the local idols to the public for adoring during the very famous “Ras Festival” which was incarcerated in the year 1932.

Rasmancha stands on a square-shaped elevated laterite plinth along with a Pyramidal Superstructure. Coming to the exceptional architecture, the length and breadth of this temple is measured as 24.5 meters and the height is 12.5 meters. The upper part of the temple is made with bricks and the base of the temple is made of laterite stone. The upper structure of Rasmancha looks like a beautifully constructed pyramid made with bricks. The middle part of the temple bears a resemblance to conventional Bengali huts and the arches along the lower area resemble Islamic architecture.

Three consecutive circumblatory galleries, arches of which are decked with terracotta lotus motifs through which the sun creates an enigmatic light and shade effect. Several images from the nearby temples were brought at the time of Vaishnava Ras Festival and exhibited in the galleries for the public.

Rasmancha has an inimitable architectural manifestation, here are 8 more interesting facts to know about this architectural whiz:

1. Oldest Brick Temple In The Country

Rasmancha is one of the first-born brick temples and one of its kind in the entire country.

2. Created With One Sole Motive

Rasmancha was created with one prime motive, to celebrate the “Ras Festival”.

3. Exhibited Deities In All Form

As already mentioned above, during the Ras festival, idols from various nearby villages (from adjoining shrine or temple), irrespective of its size (large or small) or shape, were brought to this temple. These idols were arranged for an exhibition for the common public to adorn and worship.

Bricks have been used in the upper structure of Rasmancha which comes out as one of the most interesting features of the structure. The arches surrounding the temple’s only chamber are also constructed using Bricks.

One of the most interesting things about Rasmancha is that this temple has only one single chamber in it, i.e. the sanctum sanctorum. This chamber has an elongated tower and is surrounded by traditional Bengali hut shaped turrets. There is a passageway that surrounds the chamber and homes a few large cannons which date back to the Malla period. (Source)

Rasmancha is considered as the pride of Bishnupur in West Bengal, mainly for its unique shape and also for the reason that No Architecture Or Building Matching To Rasmancha Has Been Found Elsewhere In The Country.

During the Malla Rule, the ritual and festival of “Ras” was celebrated with much grandeur. But, the “Ras Festival” was seized in the year 1932, hence now it stands outdated excepting the splendor and glory of the past days which Ras-Mancha reminded one of.

8. No More A Temple Today

The oldest brick temple, Rasmancha is no more a temple today. It means the structure has now been converted into a protected monument by the Archaeological Survey of India (ASI). ASI is making genuine efforts in maintaining this masterpiece. The delicate terracotta artistry etched on each brick and wall of the Rasmancha is being cautiously well-maintained and looked after.

Well, Rasmancha temple was constructed in a way to house the deities brought by various people from different places during the festivals. But, today this architectural wonder is just an attraction showcased by illuminating at night.

Interesting isn’t it? Do you know more unknown or unexplored brick structures in our country? Why don’t you share it with us in the comments section below?