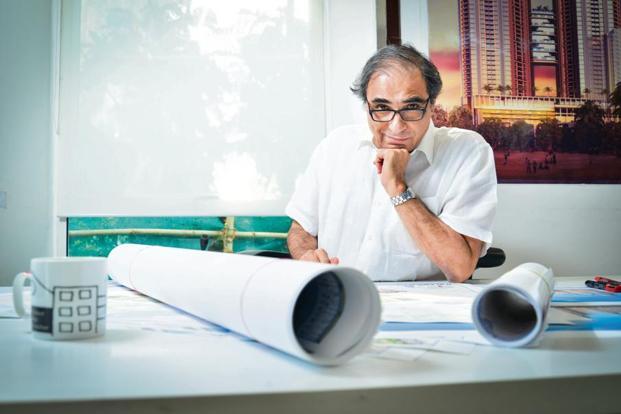 With 7.2 billion square foot of ongoing projects running in nearly 100 cities and 5 diverse countries, over 2500 clients and 550 team members, Architect Hafeez Contractor is no less than a legend in Indian architecture. He has wedged the vista of much of the built environment of urban India, with his distinctive identifying stamp. His skyscrapers, bungalows, residential developments, hotels, corporate offices, shopping malls, educational institutions, townships, railway stations, airports, urban planning, infrastructure projects, civic redevelopment, low-cost housing and so many more works in the architectural horizon in India has been challenging, erratic and totally ground-breaking.

It’s quite hard to believe that a student who was once scolded by his teachers for sketching structures in his notebooks would grow into an extraordinary architect, and now hardly needs any introduction. Yes, you read it right and that’s not all about Ar. Hafeez Contractor, there’s so much more to know.

Hafeez Contractor was born on 19th June 1950 in Mumbai and did his early schooling at Boy’s Town Boarding School, located in Nasik. In 1975, he completed his architectural studies from the Academy of Architecture at the University of Mumbai and won a scholarship to Columbia University where he pursued his Masters.

But, Ar. Contractor’s career began much earlier, in 1968 he started working as an apprentice with Ar. T. Khareghat (also his uncle). In 1977, he became an associate partner with the firm. In addition to this, between 1977 – 1980 he has been visiting faculty at the Academy of Architecture, Mumbai where he pursued his architectural degree.

Ar. Hafeez Contractor had to experience a lot of struggle in his early part of life. The most interesting part of his story is that he wasn’t a teacher favorite and always barely completed his home assignments. But one thing he did well was drawings and sketches which was an indication that he could grow up to be an architect.

Since childhood Ar. Hafeez Contractor was fond of drawing, sketching, and designing sections of forts, building, etc. It is this passion that drew him into the world of architecture and design.

The Government of India conferred Ar. Contractor with Padma Bhushan in the year 2016, for his contribution to Indian architecture for over 3 decades. Padma Bhushan is one of the highest honors given by the Indian Government to the civilians!

Ar. Contractor has won over 75 National and International Awards for excellence in contributions to architecture including:

He has twice been listed in “India Today’s Most Powerful Indians List” in the past decade. In addition to these, he has won countless awards for best commercial, residential, hospitality, and educational projects across India.

His Impressive Chart Of Work

With his passion to create building structures which typify functional and aesthetic qualities, Ar. Contractor has shaped and totally transformed the urban built scene of India. His chart of work is incredibly impressive and include few of the tallest structures on the subcontinent, The Imperial Towers, Mumbai; one of the tallest residential buildings in the world, 23 Marina, Dubai, and the iconic Main – 42 in Kolkata. In addition to this, he modernized 2 of the busiest airports of the country i.e. New Delhi and Mumbai; and the DY Patil Stadium, Mumbai that is one of the best cricket stadiums of the world.

To one side from commercial construction projects, Ar. Contractor has also invested a lot of time in researching and hypothesizing ways in which he could bring positive impact to the urban environment of the country with proposals for public spaces and slum redevelopment.

AHC is one of the leading architectural design consultancy firms in the country. The most interesting thing about this company is that it has grown from a diffident 3-person firm in 1982 to an extraordinary team of 550 plus people. The team consists of:

AHC is known for its unique design concepts and bold execution. Hafeez Contractor himself designs every single project and hands it down to his team.

Ar. Contractor is immensely passionate about social housing and has a dream to provide a house for every Indian. Ar. Contractor has been advocating for vertical growth of cities for decades, he believes in sensible land use and the need for sustainable compact cities is key to preserve a seamless harmony between the swelling population of India and its restricted land resources.