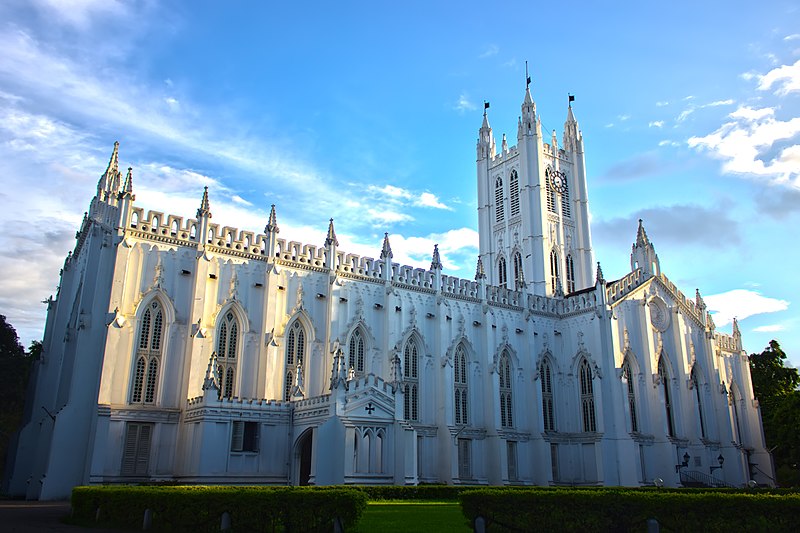 Architecture has always been symbolized as power for Indians. India is a land that encompasses some of the most beautiful architectural styles influenced by religion, culture, and history. Different eras had their direct impacts on visual appeal and design of the cities individually. And that’s how Indian architecture received an additional layer to colonization in the name of buildings which the recent-world popularizes as historical tourist spots. The rise and fall of dynasties, civilizations, and even external influences played fundamental roles in molding India’s architectural styles! And that’s how the fascinating and vintage buildings are safer grouped in as Colonial Architecture In India.

Building on this, today we try elucidating the ten most fascinating Colonial Structures in India, here’s to the prominent historical buildings that deserve a special applause.

Featuring revivalist architectural styling of Indo-Saracenic era, Victorial Memorial tops this list with a dimension of 103m by 69m! It sings high praises of a wonderful blend of British and Mughal elements! Besides, traditional elements of Islam, Egypt, and Deccan, are also incorporated! Calling it one of the colonial buildings in Kolkata is no sheer overstatement! The Markana white marble deserves an additional attention.

One of the most prominent buildings defining the Colonial Architecture In India. Located in Kolkata, St. Paul’s Cathedral features a unique architectural style. It reveals the beauty of Gothic revival architecture. This CNI church has an Anglican background in the heart of Kolkata. Being the seat of Calcutta’s Diocese, its cornerstone got laid in the year 1839! The building saw its completion in the year 1847. With that, Indians find it an impressive belonging that adds to the remarkable list of Indian architecture buildings.

Secretariat, as the name suggests, is latterly called the Writer’s Building. Marveling over the striking architectural designs is an amazing affair here. Designed by the legendary Thomas Lyon, it was officially prioritized for British’s East India Company. Even in today’s world, the verandah and ionic columns has the remarkable attacking incident dug deep within that sent ripples of terror to British politics. Coming back to its architecture, the building witnessed an inclusion of new blocks added in 1906. With that iron staircases were introduced that are currently in use.

Seems that Kolkata is a treasure of Indian architecture buildings! That’s why the top most impressive designs are being talked from Kolkata’s belongings. So, the fourth one is National Library located at Belvedere Road! Known for rare collection of historic and other books, it happens to be one of the major buildings, which features styling of colonial architecture in India. Soon, it is expected to be unveiled in a new avatar!

Gothic revival architecture pre-dominates the country’s colonial buildings. The Mumbai High Court is one of them to feature such a prestigious architectural type. Designed by some British engineer, its structure is unique that dates back to English style of early age.

Mumbai also house a couple of remarkable colonial structures in India. With that, Gateway of India becomes another important building on the historical front. It features Indo-Saracenic architecture style and has a height of 26 metres.

It would just be a disappointment, had Delhi not been a home to some of the colonial structures in India! To shove off all disappointments, here’s presenting India Gate, the prestige of India’s Capital! Earlier dubbed the All India War Memorial, this imposing high arch was designed by famous architect Edwin Lutyens!

Edwin Lutyens’ another significant design is the Parliament of India in Delhi which designed alongside co-architect Herbert Baker. Housing a seating capacity of 790, it contains Rajya Sabha and Lok Sabha. Originally, it was better known as House of Parliament.

Herbert Baker and Edwin Lutyens’ did wonders with colonial architecture in India! This is more evident with Rashtrapati Bhavan! Calling it a sheer architectural masterpiece would never be an exaggeration, for it features a classic blend of European and royal Mughal architecture.

Now that everything is covered

The ones having a special interest in European and Gothic architecture can pay a visit to any one of Colonial Structures in India! Experiencing history is something unimaginable, and if you are one of them wishing the same, why wait any longer?

You May Like: 7 Of The Oldest Building In The World