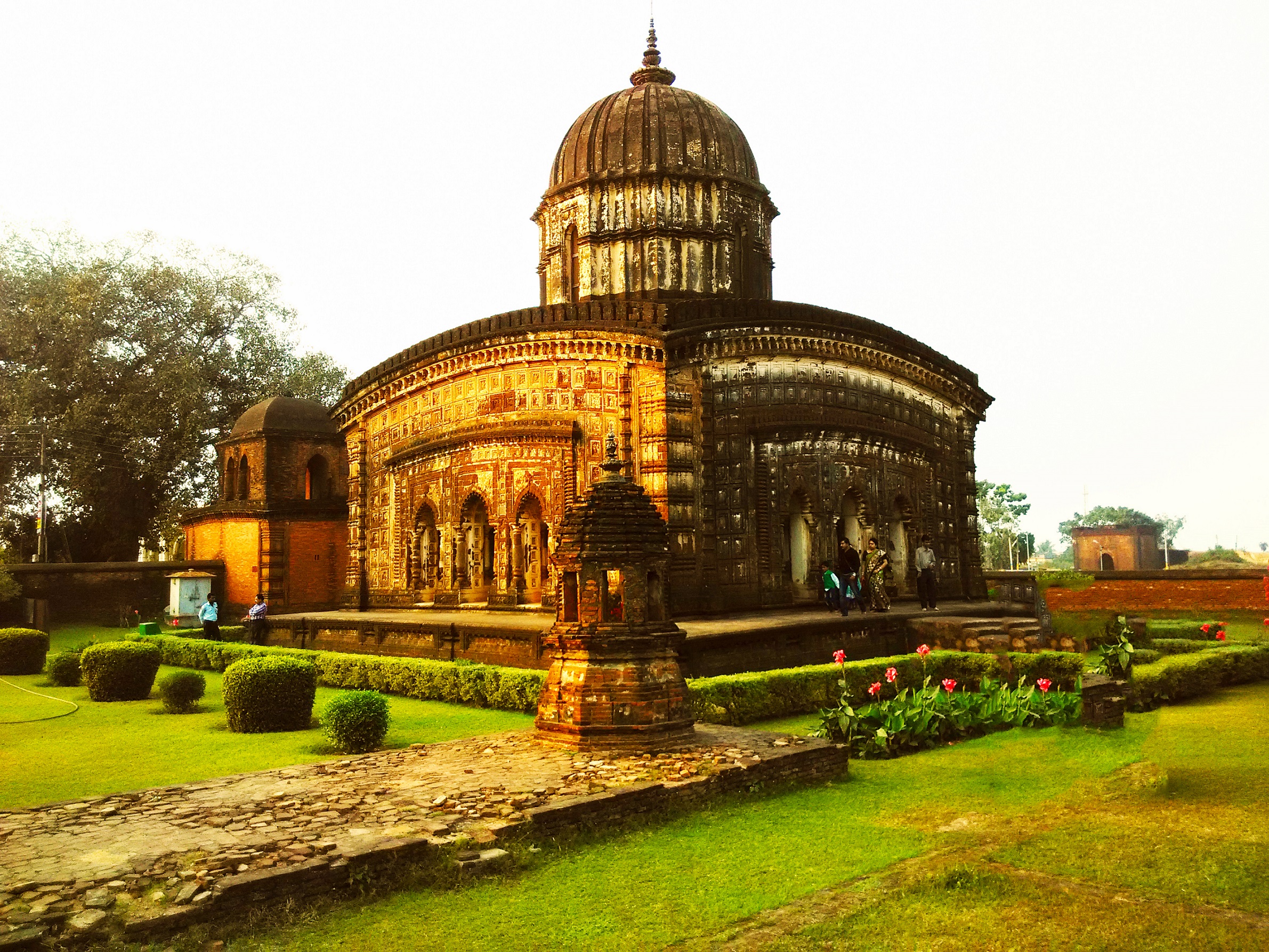 Bengal Temple Architecture, most commonly resembles those old-style mud plastered thatched huts which have either 1, 2, 3, 4, or 8 distinct layers of slanting rounded roofs perfectly dotting the landscape of the region. The temples built between the 16th and 19th century in this region resemble one of the most distinctive groups of brick monuments in India. Owing to the multiple artistic influence acting upon the region, during this period, Bengal temple architecture showcases a wide range of construction techniques and forms mainly in their curved roofs and arched entrances. In addition to this, they also reflect a fusion of local Bengal expressions and Islamic architecture.

The Bengal Temple Architecture has 7 unique roofing styles, here is a brief overview of each.

The do-chala, also known as ek-bangla, is a structure that has two sloping roofs with curved cornices that meet at curved ridges. In terms of the internal structure, there is a rectangular chamber, which is enclosed under a vaulted roof. This particular style reflects the single-celled huts of the State and has been adapted even in Islamic Architecture.

The Char-chala temples have four rectangular roofs meeting at one point. The edges of the chala, along with the cornices, are carved. It is quite a rare roofing style as far as the temples of Bengal are concerned, and you will only find a few structures with this roofing style in Nadia, Murshidabad, and Birbhum districts.

The Ratna design shows a marked deviation from the sloping or chala roofing styles. The roof in these temples is flat, and it is surmounted by pinnacles, known as ratnas or churas. The origin of this style is unclear because there are both Islamic and Hindu precedents of structures that have one turret or more than that.

The ek-ratna or single-towered structure is a more simplified version of the ratna style. This temple was particularly favored by the Malla rulers, who had built many of such structures at the seat of their power in Bishnupur. It is also important to mention that most of these temples, including the pinnacles and the cornices, are made of laterite, and not brick.

These flat-roofed styles of the temple became popular during the 19th century, especially in the district of Medinipur. In fact, in Medinipur, there is a clear distinction made between the large flat roofs, known as dalan, and the smaller flat roof known as chandni. The Rupesvara temple in Kalna and the Raghunatha temple in Bardhaman are good examples of Dalan roofing style.

The rasmancha used to be center of the autumn festivals, and it is generally octagonal with arches opening on every side, and roofs having eight turrets situated around a large central tower. The roof of these temples bears a close resemblance to an inverted flower, and it has a vase-like base.

Even today, temples stand tall as a symbol of the unique architectural sensibilities of the land and attract history buffs and architecture-enthusiasts from all over the country.

Today the realty sector has become progressively conscious of the environmental issues and this is one of the key drivers for new projects. Builders and architects are ensuring that the projects are designed to respond to the future needs of users. Moreover, buildings using earth in the modern era, have incorporated the use of rammed earth, mud brick, compressed earth, cob, and several other interesting techniques to add to its variety and finesse. The biggest advantage is the fact that these are environment-friendly materials which are being intelligently used to enhance and provide a beautiful contemporary look to a building’s architecture.

Today there are various technologies that produce building materials that are improved and sophisticated in terms of its productivity and durability – Porotherm is one such example.