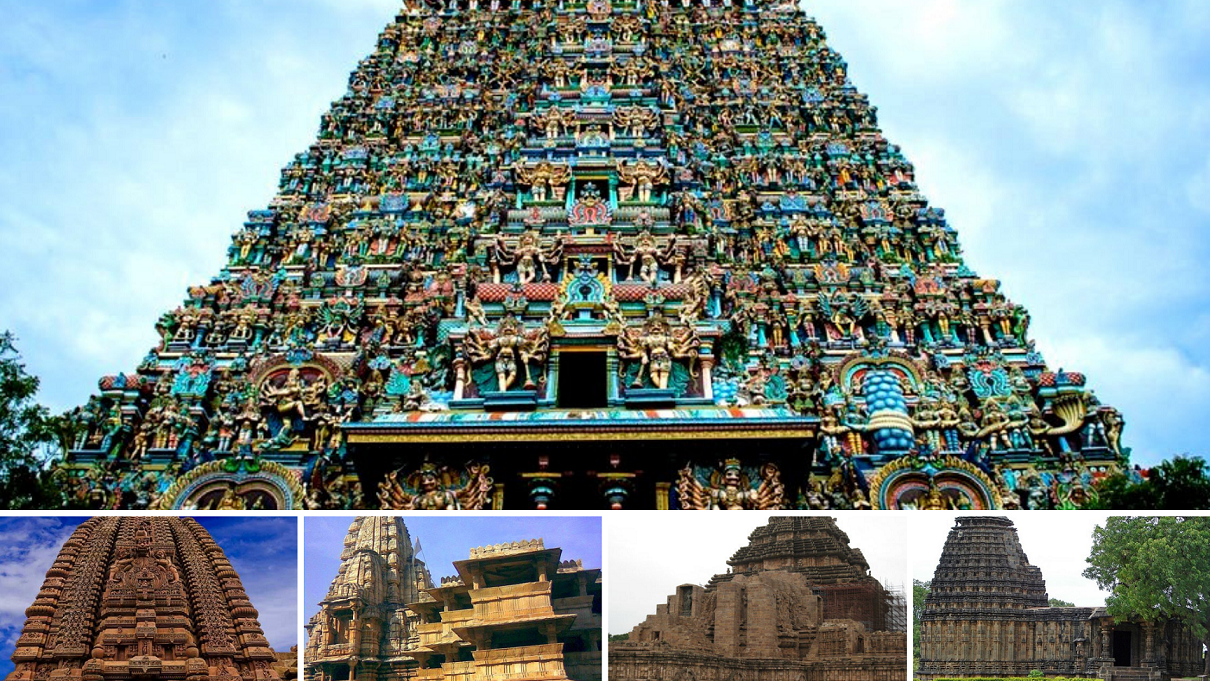 From the architecture point of view, every style of building construction echoes an evidently distinctive principle; something that represents a specific era and culture. In this context the Hindu temple architecture of India is not just the adobe of God, Goddesses and a place of worship; but they are a treasure of knowledge, culture, art, and architecture.

Hindu temples – are identified by several names in different parts of India. Commonly known as Mandir in Hindi, devasthana in Kanada, devalaya, in Telugu, koil or kovil in Tamil, etc. But at the core, a Hindu temple is an emblematic house, seat, and body of the God. A structure that was designed and built to bring humans and the supreme power of God together.

The practices and traditions followed in each of the temples in India exist not only in history but also in the present time. These traditions greatly influence the socio-cultural life of the people and give endurance to traditional Indian values. The evolution of India’s Hindu temple architecture is marked by a strict adherence to the original ancient models which were derived from religious consideration- and that remained constant over many centuries.

Here are the main elements of Hindu temples:

Hindu temple architecture varies across the country, but the basic elements remain the same. This section describes the common elements of Hindu temples:

1. Sikhara – This is the tower or the spire. Shikhara is the pyramidal roof which represents the mythological ‘Meru’ or the highest mountain top. The size and shape of the Shikhara vary from region to region.

2. Garbhagriha – Garbh means womb, in this context it is the innermost chamber of the temple where the idol of the deity is placed. Garbhagriha is also called the womb chamber; it is a square-shaped room which is entered by a door facing the east direction.

3. Pradakshina Patha – This is the ambulatory passage for circumambulation. It comprises of an enclosed corridor that is carried around the exterior of the Garbhagriha.

5. Natamandira – In olden days, rituals of music and dance were performed in Natamandira; this area is also known as the hall of dancing.

6. Antarala – Means the atrium or the intermediate chamber. This chamber unites the main sanctuary and the pillared hall of the temple.

7. Ardhamandapa – The main entrance or the front porch of the temple leading to the mandapa.

8. Gopurams – The monumental and ornate tower present at the entrance of the temple. These are more prominently found in the temples of South India.

9. Pitha – It is the plinth or the platform of the temple.

10. Toranas – The distinctive gateway of the temple mostly seen in north Indian temples.

Now about the materials used in the construction of the electric Indian temples. Materials play an imperative role in the overall appearance, construction techniques and monumental character of these temples. These temples were built using all types of materials depending upon the availability in different regions. From timber to mud, stones, plaster, and bricks Hindu temple architecture displays true expertise and craftsmanship of the historical era.

The Nagara style of Hindu temple architecture is mainly connected with the land between the Himalayas and Vindhyas. The basic floor plan of Nagara style temples are square, it has many graduated projections (rathakas) in the center of each face which imparts a cruciform shape to the exterior. A temple tower/conical/convex shikhara marks the elevation of these temples. The shikhara comprises of numerous layers which are carved these are usually crowned by an amalaka i.e. a notched ring stone. It is quite common to see the entire temple built on a stone platform with steps leading up to it. Nagara temple styles are very popular in the northern parts of India. The Kandariya Mahadeva Temple in Khajuraho, Madhya Pradesh is one of the finest examples of Nagara Architecture.

Dravidian architecture is one of the most prominent architectural expression in Hindu temples. This architectural style emerged in the southern part of the Indian subcontinent. The Dravidian architecture consists mainly of Hindu temples which has a high gopura or gatehouse; large temples consist of many gopuras. Countless empires and kingdoms like the Cholas, the Kakatiyas, the Pandyas, the Chera, the Kadambas, the Rashtrakutas, the Pallavas, the Gangas, and Vijayanagara Empire among others have made a considerable contribution to the evolution of the Dravidian style. Majority of the existing Dravidian temple structures are located in the Southern Indian states of Karnataka, Telangana, Andhra Pradesh, Kerala, and Tamil Nadu.

During the Badami Chalukyas rule, Indian architecture witnessed a totally eminent phase. During 500 and 757 CE, Badami Chalukya laid the foundation of cave-temple architecture on the banks of Malaprabha River in Karnataka. The Badami Cave temples located in the town of Badami in northern Karnataka is one of the finest examples of this architecture. More than 100 temples located in the village of Aihole’s historic temple complex and also Group of Monuments of Pattadakal are recognized as UNESCO’s World Heritage site including architectural structures like the Mallikarjuna temple and the Virupaksha temple which are other dazzling examples of the Badami Chalukya style.

The Gadag style of temple architecture is also known as Western Chalukya architecture. It flourished for 150 years from 1050 CE to 1200 CE; during this period, around 50 temples were built. This style is marked by ordinate pillars with intricate sculpture. Few examples include the Doddabasappa Temple at Dambal, the Amriteshwara temple at Annigeri, the Saraswati temple in the Trikuteshwara temple complex at Gadag, and the Kasivisvesvara Temple at Lakkundi.

One of the most prominent examples of the Kalinga architecture is the Jagannath Temple of Puri and Konark Sun Temple. Kalinga architecture flourished in the beautiful state of Odisha and Andhra Pradesh. Three unique types of temples built under this style are Rekha Deula, Pidha Deula, and Khakhara Deula. The term Deula in local language means ‘temple’.

The Indian subcontinent in its extensive history dating from 2500 BC to the colonial period has left behind an architectural legacy in the form of different types of temples. This legacy is a treasure of a huge variety of architectural styles. No wonder it has been and will continue to be an interesting subject of study for numerous architects, builders, and other professionals in the construction industry.