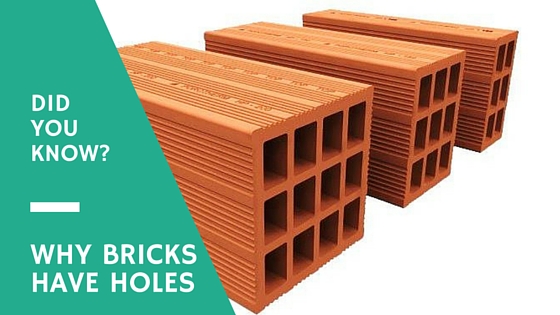 The term “Hollow” or “Holes” have an interesting tendency to make many visualize something which is delicate, permeable, weak, flimsy and prone to destruction, something certainly not easily acceptable on the walls of your home! True, but when it comes to Porotherm clay bricks with perforations being an integral element of their design, being “hollow” is not so bad after all. Easier said than to believe. So allow me to be more explicit.

The two most prominent features of Porotherm bricks 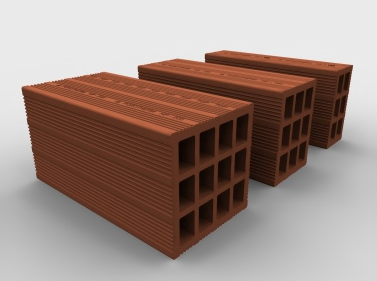 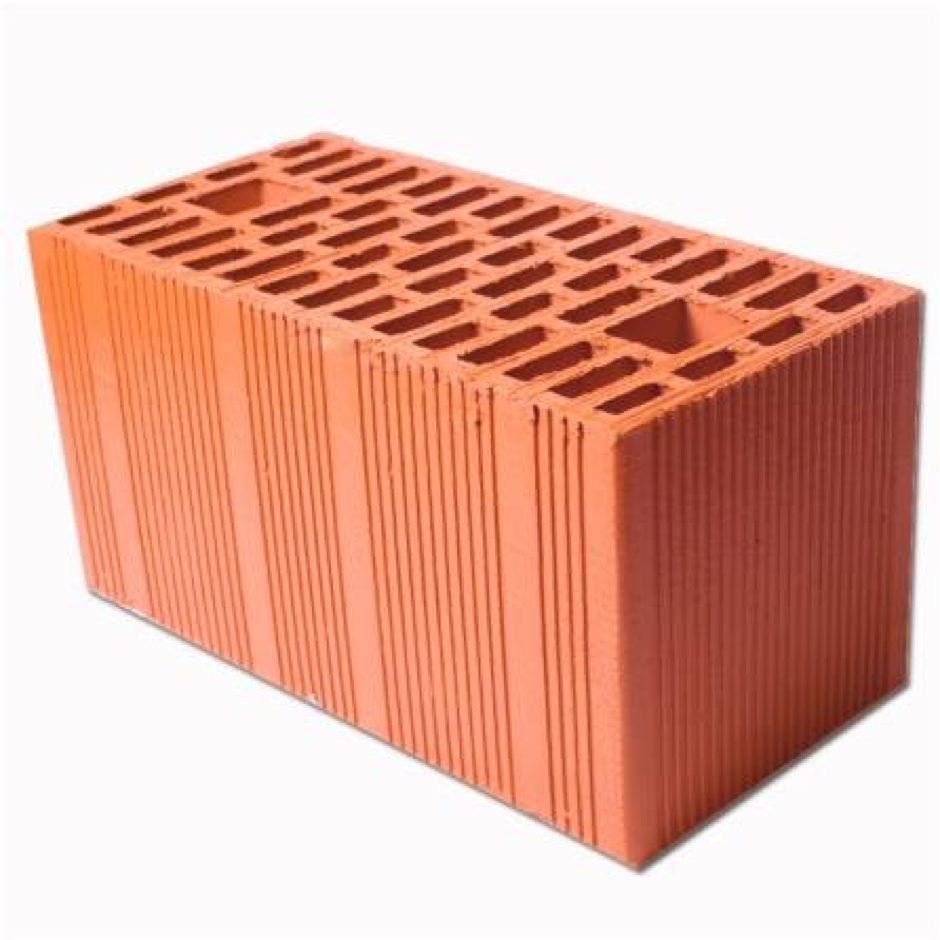 Now both the above features help in a variety of ways, the most important being improving thermal insulation for your home interiors.

A common example would be earthen pots used in olden times and are still in vogue in rural areas, to store water. Places where mid-day temperatures go soaring high, you will be surprised to discover, when someone offers you a glass of water from an earthen clay pot, the water would be relatively much cooler, something you will not find if you drink from a plastic bottle or from tap water which is supplied via water tank kept on the roof of the building. The direct heat from the sun is absorbed by the container, transferring the heat to the stored water inside. Clay, as a substance, has an innate ability to restrict conduction.

Another common example would be the clay lamps or traditional Indian ‘Diyas’ which are used during festivities across India, if you hold a burning Diya, your palm will not feel the heat from the lighted lamp. Hence, when clay based walling material, like Porotherm, is used, the same principle applies, where in the outside heat gets blocked by the substance.

Now, I believe, to convince you about the thermal property of clay and the benefits of Porotherm walls made of clay should not be that challenging, but one may ask, what is the use of having perforations in the bricks? If it is already made of clay, then thermal insulation will happen any ways to some degree, why put the holes? Very pertinent question.

The holes have been consciously introduced to further enhance the product’s thermal insulating capacity and to decrease the weight of the product thereby reducing the overall structural load / dead load on the building. I will come to the weight part shortly. Let’s now concentrate of the thermal insulation aspect of Porotherm clay bricks.

For this, let us have an understanding of how a building gets heated up in the first place…
Heat can pass through walls, roofing, windows and doors, the floor and even through your framework. 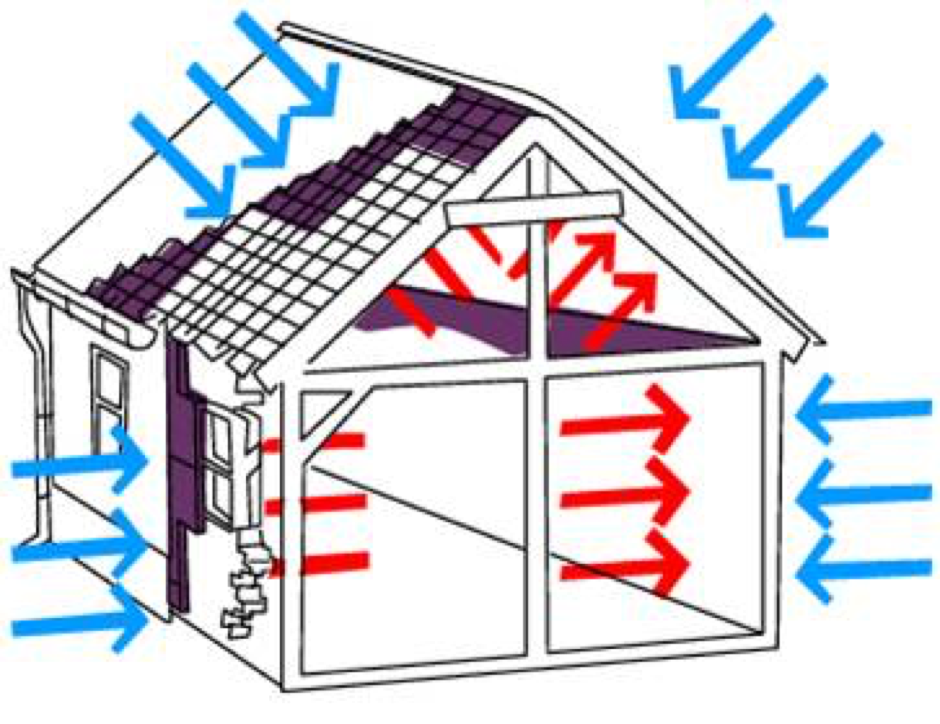 Heat entering the home comes mainly through the ceiling (25-35%) but windows account for just as much heat gain (25-35%) and walls also play a larger role (15-25%), as all are directly exposed to the sun. Hot winds blowing through as draughts can also contribute to heat entering your home (5-15%). Using Porotherm clay bricks for insulation helps to control how much heat is allowed through the walls.

When it’s warm outside, non-insulated walls and windows become warmer on the inside.

Result: More energy is required to replace the heat lost cooling the inside of the walls and windows.

The voids or perforations in the Porotherm bricks will help in trapping air space within the holes. Air is a bad conductor of heat and hence will slow the migration of heat energy and help maintain the indoor temperature. 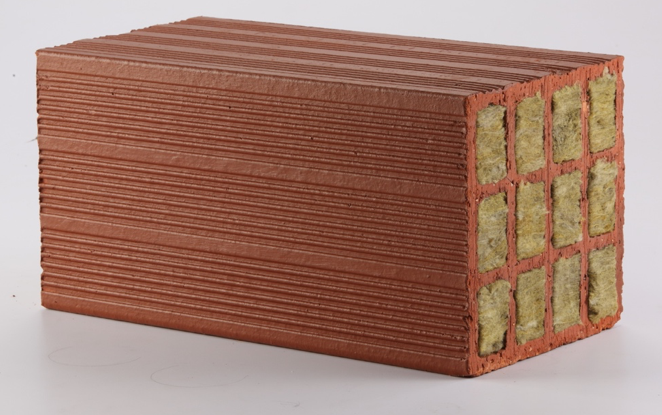 When sunlight enters an air-conditioned room through a single pane window, heat energy is generated in the room.

Result: The air conditioning system must run longer and work harder to overcome the heat gained through the window.

Hence, even if air conditioning is working, huge amount of energy is required to bring down the temperature inside leading to exaggerated power/ utility bills. Moreover, power shortage becoming a more and more perennial problem these days in all major cities in India, having a state of the art split Air Conditioning system from the best Korean brand may not be of much help…Hence it is always best to seek a natural, healthier, and energy saving alternative.

So next time you see bricks with holes being used in a construction site, you’ll know all about its benefits and utility and hopefully be less skeptical.

Now, to come back to the point about holes making the bricks light weight, as discussed initially. By incorporating the perforations in the design of Porotherm bricks, less usage of resource compared to a solid brick, has transformed a clay block like Porotherm into a Resource Efficient Brick. The resource required for the surface area has been reduced due to the presence of the voids, which has in turn reduce the overall weight of the brick by almost 60% compared to a solid concrete block.

“Hollow clay blocks are earthy, season sensible, practical to work with and bring down your construction cost by more than 15 per cent” says Architect Krishna Rao Jaisim (of Jaisim Fountainhead and Chairman, Indian Institute of Architects, Karnataka Chapter), who is a champion green architecture promoter in South India.

A building structure has mainly two types of load

Which include the non-movable loads on the building like the weight of the walls, doors, windows, floor tiles etc. In other word the dead load includes loads that are relatively constant over time, including the weight of the structure itself, and immovable fixtures such as walls, plasterboard or carpet. Roof is also a dead load. Dead loads are also known as permanent loads.

All movable loads like peoples, furniture etc., basically any load that can be moved from one place to another.

The dead loads constitute the maximum load that the structure of the building take, and hence if this load can be reduced, then a substantial reduction in the consumption of steel and concrete used for the foundation and columns, can be achieved. This would be a huge saving opportunity for the developer or builder or even an individual house owner.

• Highly Durable: The brick is 100% natural, made of clay burnt in 900◦C to 1000◦C, making the brick durable & long lasting.
• Low Maintenance
• Load Bearing, strength can be specified as per the requirement.
• Fire Resistant
• Economical
• Environment Friendly; Coal ash, granite slurry and rice husks (All by products of other industries) are used as raw material.
• It is a faster and easier construction system, when compared to the other conventional construction systems.
• Increased carpet area.
• Assured Quality: Fully automated, state of the art, manufacturing unit in Kunigal, Karnataka.
• Better sound absorption: Being hollow in nature.
• Reduced thickness of plaster: – Due to size accuracy & less cement consumption due to fewer joints.
• Easy installation of appliances & fixtures.

Authored by a Building Expert from Wienerberger India
For an expert advice , drop a word at our email id gosmartbricks@gmail.com