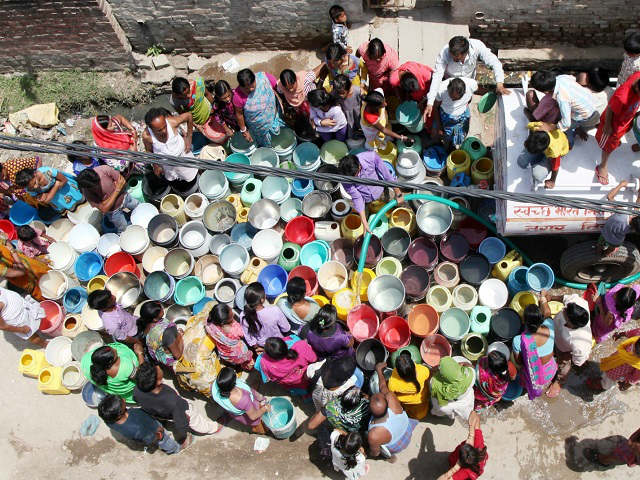 Currently facing scorching heat, Bengaluru city is facing severe water shortage and among the worst hit are the newly-developed areas and the IT corridors.

It’s a disappointing fact, but Bengaluru has gone far from being the beautiful green and beautiful city of lakes to the city of concrete. This problem can be attributed to the city enticing a lot of immigrants from all over the country due to its vibrant culture, ideal weather and booming IT industries. Unquestionably, the rapidly growing population and speeding construction activities have put a huge strain on the city’s natural resources and led to the depletion of the wells and lakes – This is exactly why all the water disappeared.

While many of us simply mourn this traumatic condition, there are many inspiring individuals and citizen groups who are perfectly answering the common question – How can we conserve water? These individuals are experimenting with different effectual methods to conserve water and working loyally to save every single drop of it. Realizing the importance of water conservation, we bring for you today, 3 remarkable examples from Namma Bengaluru that enlighten the ways to how can we conserve water.

How Can We Conserve Water – Hear From These Inspiring People

A R Shivakumar, a senior scientist at the KSCST (Karnataka State Council of Science and Technology) at Indian Institute of Science (IISc) believes a lot of water is being wasted due to mismanagement of water. He also believes a properly planned rainwater harvesting (RWH) system could help in effectively sustaining the city’s water supply. Here are some interesting things about his water conservation journey:

Shivakumar started constructing his house in 1995. Back then, he did intense research to look for alternatives which would fulfill his family’s needs and at the same time would not harm the environment. Amazing isn’t it? If you are planning to construct your new home, this story would be the perfect one to draw some inspiration.

S Vishwanath And Wife Chitra home in Vidyaranyapura was built using compressed, stabilized earth blocks, excavated from the site. Their home is a true example of Sustainability and was designed by the couple itself. Of course, for Vishwanath, a Civil Engineer and Urban and Regional Planner, and Chitra who was an architect, designing their dream home was a difficult task. Here’s more to how can we conserve water their way:

You will be surprised to know, not only is their water bill zero for 8-10 months, but their electricity bill is also 1/4th that of regular houses, interesting isn’t it?

Typically, in RO filters, a lot of water gets wasted to purify water. The residents collected water from these RO (Reverse Osmosis) filters and filled in a bucket and kept outside homes and used it for non-drinking purposes. Later, the building associated brought big drums to collect water, these were placed in the parking lot and stored collected rejected RO water from every apartment.

This is exactly how the residents managed to save 500 liters of water every day. The collected water is used for other purposes like watering plants, cleaning cars and washing the parking lot. This isn’t all, the residents also went a step ahead and began using water-saving aerator or adaptor which reduces water flow in the tap.

No doubt, with this noble initiative, the residents of this complex are setting a solid example for the fellow Bengalureans to follow.

Years of rapid urbanization, a swelling population and mostly significant – Poor Water Management has led to drying taps, falling groundwater levels and filth-frothed lakes which can burst into flames any moment. Bengaluru is paying a huge price for its success since marketing itself as a tech hub and attracting top firms including Microsoft, IBM, Dell, and Google. Its time its residents act responsibly or pay the consequences later.

Drop us a word for any query on water saving products at wienerbergerindia@gmail.com