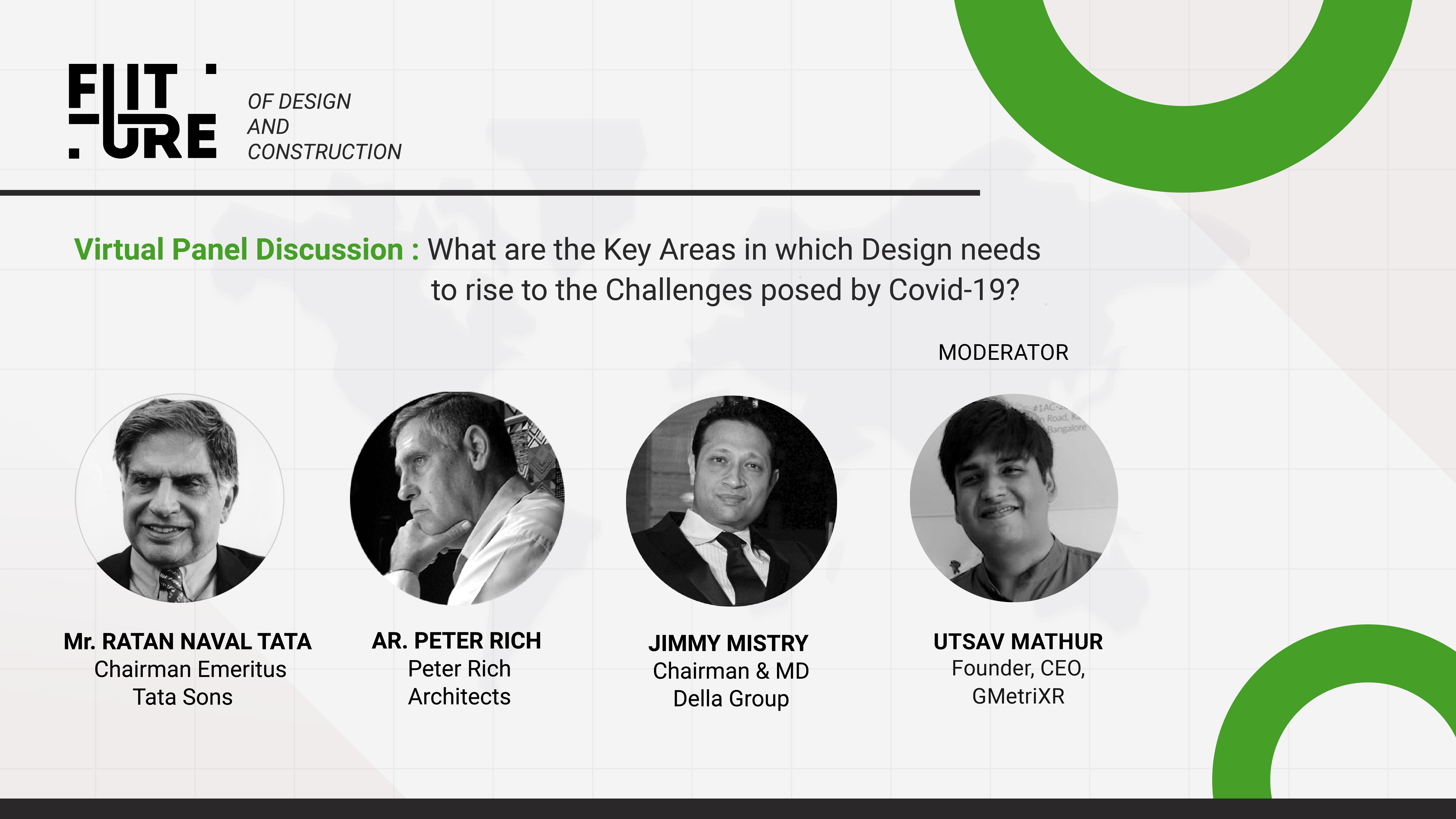 A recent virtual event entitled “The Future of Design and Construction”, an initiative by CorpGini to present the industry’s opinion on the economic effects of COVID-19. The panel had eminent personalities starting with none other than Mr. Ratan Tata, Chairman Emeritus Tata Sons, Ar. Peter Rich of Peter Rich Architects and Mr. Jimmy Mistry, Chairman & MD Della Group with the panel being moderated by Mr. Utsav Mathur from GMetri. For this virtual panel session, around 18000+ audience tuned in online. The panel discussed the key areas in which design needs to rise to the challenges posed by COVID -19. This is in the backdrop of the likelihood of Covid-19 reshaping the AEC, Real Estate, and design industry landscape and morphing long-standing norms of designs.

Not many people know about Mr. Tata’s love for architecture and the fact that he worked as one for a short period before entering the world of manufacturing. ‘Architecture is a satisfying profession’, was how Mr.Utsav started the discussion by quoting the words of Mr. Tata himself. He further shared a quote: ‘All buildings are predictions and all predictions are wrong,’ and invited a response from him about the relevance of design education and focus areas for designers in the coming days. Mr. Tata expressed his concern over the situation of the slums in India and emphasized that it is the slums that need the most attention. ‘We remove the slums and relocate them 30-40 miles away, thus making them far away from their place of work’, he said. He further added that high-value housing is then built on the slum land while ‘what the slums get is just the residue as we build more vertical slums’.

Mr. Rich called for prioritizing the quality of human life overgrowth. ‘The poor do not have the infrastructure but they have the skills needed to create this infrastructure he said. ‘Architects should do human-centered work and must self-learn the science of anthropology. They should become problem solvers and offer design-oriented solutions; said, Mr. Jimmy Mistry. He further shared with the panel his views that a home office is going to be the order of the day and this home office will be equipped with the right light, automation, and acoustics. Mr. Rich suggested that India must take learn from Kerala floods and pollution in Delhi as examples to fight this pandemic.  Your rivers are filthy while you work towards cleaning your cities,’ he said, asking Indians to start working from the basic level first.

The panelists were asked how a people-centric approach can be used to bring in a design change to which Mr. Tata cited the case of the Indian slums. We should be ashamed. The environment that we provide for low-cost housing, is it fair? There is an image that we want to project and things that we want to hide.

We must have a social responsibility as architects’, he said, further stating that this situation is a wakeup call for all of us. Mr. Jimmy added to it by mentioning that slums are a big challenge for the Prime Minister. These slums lack fresh air, have a high population density, and the proximity that people live in here is an invite for health-related problems. Slum development is the need of the hour. The slum dwellers must deal with the developer directly so that the development happens without any hiccups and in the right manner. Mr. Rich also expressed his concern over the condition of slums in India and laid stress on the importance of human capital.

Mr. Jimmy Mistry underlined that architects and designers need to be problem solvers. “The biggest the factory that we have is our mind and body; we need to give design solutions,” he said. Highlighting the need to pump up tourism, quality tourism through design and getting the government to partner, he also drew attention to the way slum rehabilitation is struggling because of lack of funds combined with the fact that design has played no role in it until now.

Role of the government in the systemic shift

‘Government needs to enter into a partnership with society. The central government must release funds for slum redevelopment’ was what Mr. Jimmy feels should be the initiatives that the government must take. Mr. Tata called for an acceptable standard of living for the slum dwellers. ‘We are creating communities that we are ashamed of’, he added. Mr. Rich also emphasized the role of the community and suggested that it be made a part of the development process. ‘Indians should believe in themselves. The answers are there itself in your culture’ he said.

With work from home becoming the new norm, the panelists discussed how we can rethink the urban fabric. While Mr. Jimmy stated that we need open communication, Mr. Tata said that the transition has to be real and we must never compromise on the quality of life. The panel agreed unanimously that the entire design fraternity worldwide must now collaborate and recalibrate.

Mr. Tata said that while businesses like IT can work remotely, even businesses that require physical presence will also have to think on these lines. Mr. Rich gave the example of the Indian city Bangalore where he feels the direct effect of working remotely will be on the traffic of the city. He also gave the example of New Jersey, USA where several office spaces that had been rendered useless with remote working, were being used for urban farming even before COVID-19 had started to affect the world.

Another effect that remote working will have is that people might look into buying large apartments that can also double up as the office space. Factories will have to incorporate accommodation space within the premises to keep the labor nearby and for the supply chain to keep running in case such a situation arises again.

In his closing comments, Mr. Tata said that we must give to the community what they need and not what we want to give to them. ‘Homes are now going to be multigenerational and there is a need to rethink the design. We must not forget the grammar of the language of architecture’, said Mr. Rich. Utsav Mathur, CEO, GMetri said: “The onus is on designers to rise to this occasion, it is a resurgence of the designer and architect as a problem solver.”

The panel gave an insight to the audience about how designers and architects will now have to become problem solvers and design solution providers. Prioritizing humanity over the economy is what must be done now was the consensus that the panel arrived at the end of another charged discussion on day 1 of the webinar.