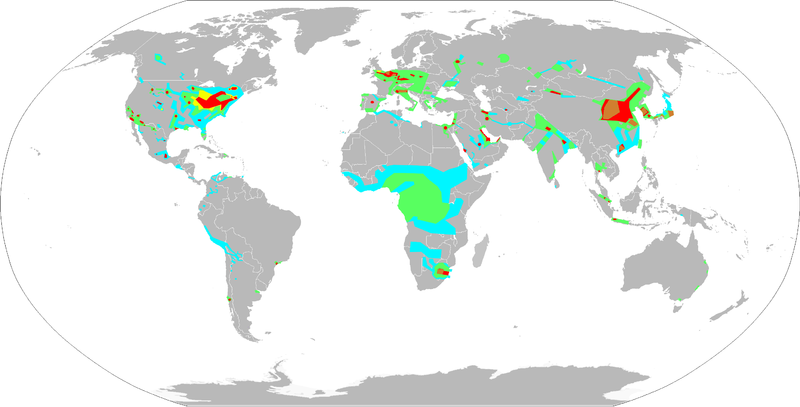 Chinoz “The overall AQI reported in Delhi is 309 today, the city’s air quality index (AQI) has dipped into the ‘very poor’ category” …. If you hear this on your local news, what does it mean? Are you at risk? Do you know what to do? An air quality index is an indicator for the public, it informs the people about pollution levels in the air and advises vulnerable groups—like the elderly, children, and people with lung disease—to take precautions. With air pollution being one of the major points of concern in the country, we all should know what Air Quality Index means to us. With this blog, we aim to bring forward the top 5 things you should know about AQI, keep reading.

#1 What Is Air Quality Index?

An air quality index (AQI) is a number used by government agencies to communicate to the public how polluted the air currently is or how polluted it is forecast to become. As the AQI increases, an increasingly large percentage of the population is likely to experience increasingly severe adverse health effects.

The air quality index or AQI is an index that reports the air quality daily. It is a degree of how air pollution disturbs one’s health within a short time. The main purpose of AQI is to help people understand how the local air quality adversely impacts their health. The higher the AQI value, the bigger the level of air pollution and the larger the health concerns. AQI quickly disseminates air quality information in real-time.

The Environmental Protection Agency (EPA) computes the AQI for five deadly air pollutants, for which national air quality standards have been established to safeguard public health.

The awareness of AQI has been widely used in many developed countries over the last three decades and with increasing concerns with air pollution, its importance has gained prominence.

2# How is AQI calculated?

Every day AQI monitors record concentrations of the major pollutants. These raw measurements are converted into a separate AQI value for each pollutant (i.e., ground-level ozone, particle pollution, carbon monoxide, and sulfur dioxide) using standard formulae developed by EPA. The highest of these AQI values are reported as the AQI value for that day.

3# Why is AQI important?

Awareness of daily levels of air pollution is important, especially for those suffering from illnesses caused by exposure to air pollution. And while it is not possible to control air pollution, we can limit our exposure to it at least to some extent. This is exactly why we should know about it. Who is most at risk from air pollution?

AQI can demystify data – you don’t need to be an expert to understand AQI values – they’re easily scaled and color coded – there is no need to understand units and concentrations. The main objectives of the Air Quality Index (AQI) are:

The main benefit of using an AQI is its sheer ability to communicate data with the public, both easily and conveniently.

The AQI is alienated into 6 categories, each category is meant to correspond to dissimilar health concern levels. We explained them below:

At this level, the quality of air is deemed to be satisfactory. Air pollution possess no or very little risk and this category has no health implications.

Acceptable AQI, but some pollutants may create modest health concerns for a limited set of hypersensitive people. For example, people who are remarkably sensitive to ozone may face respiratory issues like minor breathing difficulties.

This AQI indicates pollution levels that are unhealthy for sensitive groups. It may cause breathing troubles for people with lung disease like asthma, and discomfort to people with heart disease, children, and older adults.

In this category, every person might experience some adverse health effects. Sensitive group members may experience more serious effects. The hearts and respiratory systems of healthy people may be affected. Children, seniors, and people with heart or lung disease should cut back sustained and high-intensity outdoor exercises or reschedule strenuous activities.

This would issue a health alert to mean that everybody may experience very serious health implications. May cause respiratory illness in people on prolonged exposure. The effect may be more pronounced in people with lung and heart diseases.

Air quality at this level is life-threatening and would issue warnings of emergency conditions for the entire population.

At a glance, the table below provides the Air Quality Index (AQI) categories 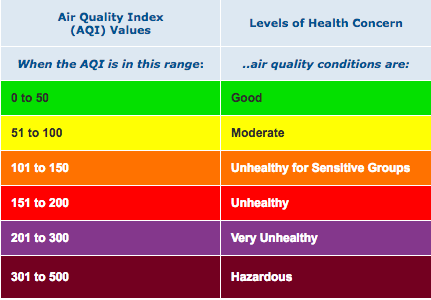 The National Air Quality Index (AQI) was launched in New Delhi on September 17, 2014, under the Swachh Bharat Abhiyan.

The Central Pollution Control Board along with State Pollution Control Boards has been operating the National Air Monitoring Program (NAMP) covering 240 cities of the country having more than 342 monitoring stations. An Expert Group comprising medical professionals, air quality experts, academia, advocacy groups, and SPCBs was constituted and a technical study was awarded to IIT Kanpur. IIT Kanpur and the Expert Group recommended an AQI scheme in 2014.While the earlier measuring index was limited to three indicators, the new index measures eight parameters. The continuous monitoring systems that provide data on a near real-time basis are installed in New Delhi, Mumbai, Pune, Kolkata, and Ahmedabad.

There are six AQI categories, namely Good, Satisfactory, Moderately polluted, Poor, Very Poor, and Severe. The proposed AQI will consider eight pollutants (PM10, PM2.5, NO2, SO2, CO, O3, NH3, and Pb) for which short-term (up to 24-hourly averaging period) National Ambient Air Quality Standards are prescribed. Based on the measured ambient concentrations, corresponding standards, and likely health impact, a sub-index is calculated for each of these pollutants. The worst sub-index reflects overall AQI. Likely health impacts for different AQI categories and pollutants have also been suggested, with primary inputs from the medical experts in the group. The AQI values and corresponding ambient concentrations (health breakpoints), as well as associated likely health impacts for the identified eight pollutants, are as follows:

These were the 5 basic things you should know about Air Quality Index.

Air pollution is one of the biggest threats to the environment and affects everyone: humans, animals, crops, cities, forests, aquatic ecosystems… While many steps are being taken to tackle this problem… we need still need to know – are they enough to handle this global threat?

7 Top Polluted City In India With The Worst Air Pollution