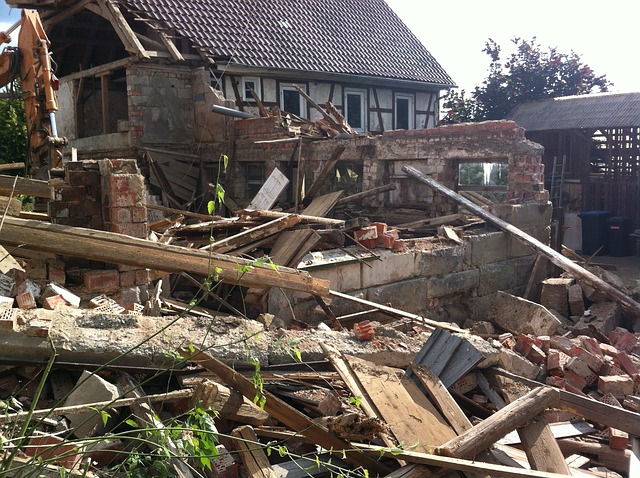 A few months back, we had the misfortune of witnessing one of the worst natural disasters of this century… the Nepal Earthquake. The horrors suffered post the near apocalyptic destruction not only instils fear, but also, makes you realize the significant co-relation between earthquakes and building construction.

The first thing that needs to be clear is that an Earthquake does not directly lead to loss of life… The shaking of the ground results in the destruction of buildings & infrastructure which may lead to injury or loss of life… People generally die due to building collapse, many times without warning or giving enough time for people to evacuate. Hence we may conclude that inappropriate construction practices for buildings have led to its inability to withstand the force of an Earthquake.

Now, before we get into how buildings can be built more earthquake resistant buildings, let us first understand the basic science behind the occurrence of an earthquake.

The most common cause of earthquakes is explained by the Theory of Plate Tectonics.

According to the theory, the earth was a single land about two hundred million years ago. This land splits progressively over a long period of time and it gave birth to tectonic plates. Theses tectonic plates are still moving and earthquakes are the result of these movements. Therefore, the continents of the earth are like several pieces of a crust – the tectonic plates, which are floating on a viscous mass – the magma, a thick liquid composed of rocks in fusion.

Under various circumstances, these tectonic plates are still moving, very slowly, towards each other or away from each other. These movements generate a lot of friction, which generate tensions and compressions in the earth’s crust. This friction is like energy, which gets stored in the deepest strata of the ground. Earthquakes happen when the ground cannot accumulate anymore this energy, which is then released with violence on the surface of the globe. The original focus of the earthquake is called the hypocenter. It lies deep into the ground. The geographical point on the surface, which is vertical to the focus, is called the epicentre.

The hypocenter of an earthquake generates various types of waves. When they reach the surface, the ground shakes everywhere horizontally and vertically especially near the epicentre. The motions are always reversible and this implies that buildings vibrate in all directions and in a very irregular manner due to the inertia of their masses.

India has been mapped in 5 Seismic zones, according to the risk of earthquakes: zone 5 has the greatest risk for earthquakes (See IS 1893: 1984). These zones are mainly based on the Mercalli scale. They are related to: 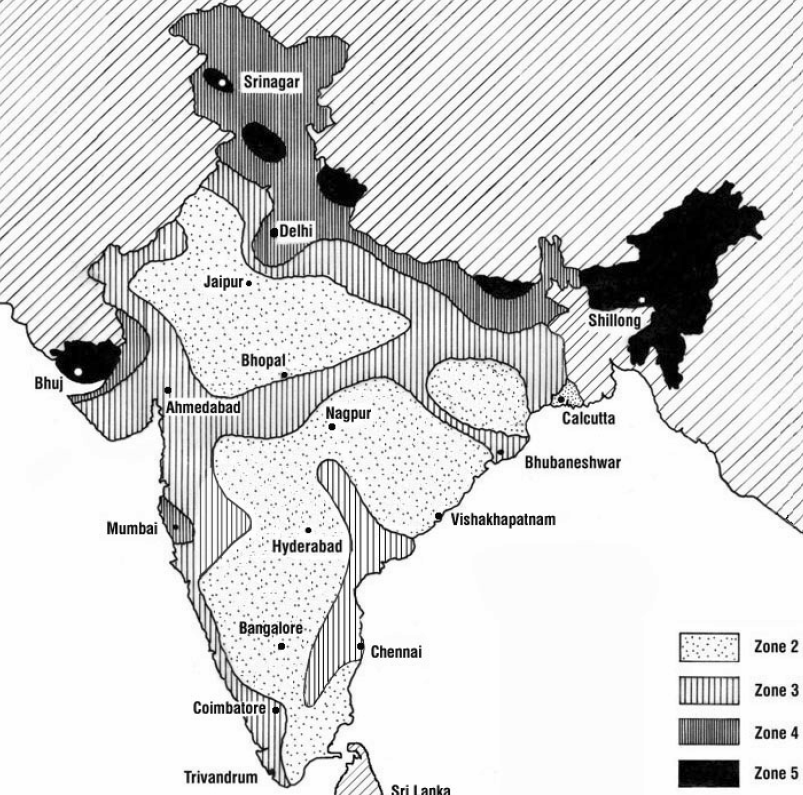 Unfortunately, unlike predicting tornadoes, cyclones and even tsunamis, science has still not yet come up with a full proof method of predicting earthquakes. But even if it is not possible to predict earthquake with accuracy, it is always possible to minimize loss of material and life by constructing earthquake resistant buildings which can safeguard its inhabitants as well as people outside, from an earthquake, simply by following scientific design principles and use of intelligent building materials. All advanced countries and most developing nations, including India, have predefined building codes which, if strictly followed, can help prevent large scale disasters. Unfortunately in developing nations, very minute percentages of such buildings are ever made, making people more susceptible to calamities.

Structural elements, such as walls, columns and beams, are only bearing the weight of the building and the live load under normal conditions: mostly compression forces for the walls and columns, and vertical bending for the beams. Under dynamic load, they also have to withstand horizontal bending and shear forces, and extra vertical compression forces. 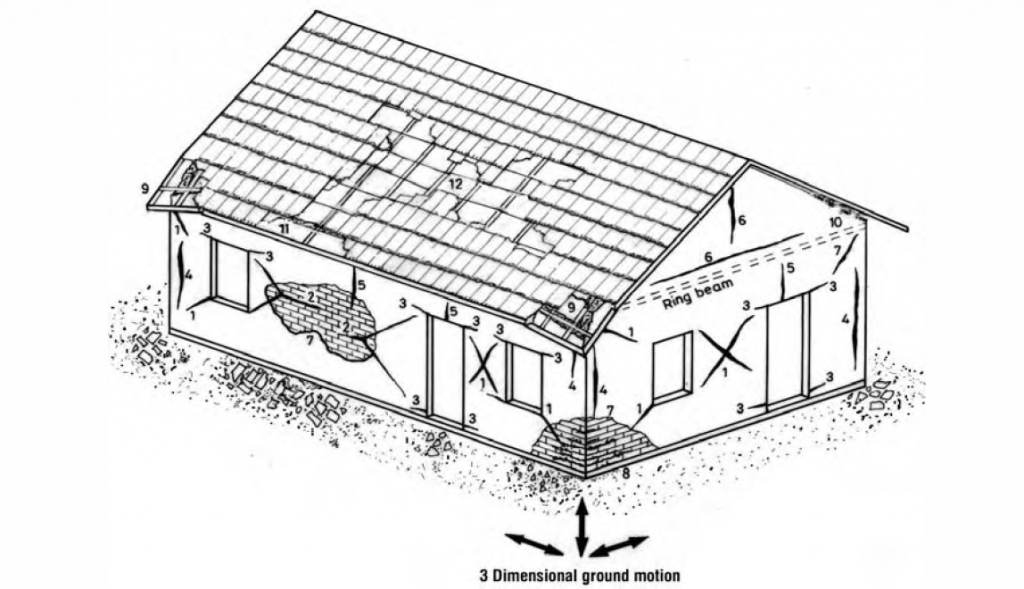 Walls built with heavy walling materials tend to render the building more rigid and less flexible to seismic forces… When an earthquake occurs, the building can sway horizontally or vertically and if the building is too rigid, the propensity to develop cracks will be higher, ultimately leading to collapse. On the other hand, light weight walling materials like Porotherm Smart Bricks, by virtue of its perforations/hollows, are typically 60 % less weight than conventional materials, can make the building more flexible to ground movements… It will swing and sway and it might be damaged. But the possibility of collapse is comparatively minimized. An earthquake resistant buildings, which has been damaged, could, most of the time be repaired.

The addition of steel reinforcements can add ductility to brittle materials. Reinforced concrete, for example, can be made ductile by proper use of reinforcing steel and closely spaced steel ties.

According to  REIDsteel (a worldwide structural engineering company who specialize in designing and creating stadiums and multi-storey car parks as well as earthquake resistant buildings) to effectively dampen impact energy, the building must be created with materials of high ductility. This means that the materials must have the ability to undergo large processes of plastic malformations. Solid brick and concrete for example, are not good materials to use when trying to make an earthquake resistant building due to their low ductility.

The impressive Burj Khalifa building of Dubai, for example, has a unique structure which consists of an intelligent tubular system embedded with structural steel. This incredible building features an immense “mass dampener” within its peak, which serves to dampen the motion created by earthquakes. This reduces impact which could damage the structure of the building or disturb its inhabitants.

The roof of an earthquake resistant building must be as light as possible too. This can be done with profiled steel cladding together with a layer of added insulation. It’s also important that the floors and walls of the building are made as lightweight as possible. This means that its light, flexible structure is able to absorb and, if necessary, even bend with the impact, preventing the building from being damaged. To ensure that an earthquake resistant building is built on the correct foundations. Earthquakes often knock buildings from their foundations which caused architects to come up with the idea of placing the building above its base on a series of flexible springs and cushioned cylinders.

A variety of different types of cylinders are used, but the most common is the rigid lead core wrapped in alternating layers of rubber and hardened steel. The core centre provides vertical strength whilst the alternating layers of rubber and steel material provide horizontal resistance. These flexible but sturdy poles can be attached to the building with steel plates elevating it away from the damaging force of the earthquake’s impact whilst they absorb and move with the vibrations.

When the earthquake comes, the springs and cylinders will move with it rather than the whole structure of the building, minimizing the damage caused.

In Nepal it is commonly believed that thick, strong bricks perform better during earthquakes.  Heavy bricks are also used to save money on reinforced pillars. However, the opposite is true: the stronger the pillar and the lighter the brick, the better a building performs during an earthquake.

Ground shaking generates internal forces within the building called inertial forces, which in turn causes maximum seismic damage. The greater the mass (the weight of the building) the greater the internal inertial force. Light weight construction material with less mass is an advantage in seismic design. Greater mass also generates greater lateral forces, thereby increasing the possibility of columns being displaced, out of plumb and or bucking under vertical load.

The essence of successful seismic design is of threefold